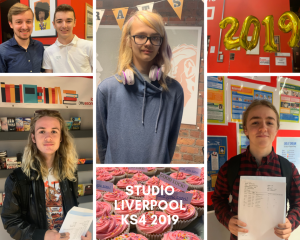 Students at the Studio recorded a glowing set of GCSE results in 2019; securing our spot as one of the top destinations for creative and digital courses in the country.

62.5% of English and Maths GCSE at the Studio School were above level 4 and there was also 100% pass rates at GCSE further maths – 60% of those scored A or A* and an 85% pass rate in Creative Media.

Kaelynn Faulkner celebrated great results. ‘I’m happy – and proud. Maths is my favourite and I did really well – I got a 9. I’m going to study graphics & would like to go into animation. There’s a heavy focus on tech here and I have a real passion for it.’

Frankie Barlow, who collected great results this year, says ‘I’ve got a B in my favourite subject, graphics.’ He’s staying at the Studio to study graphics, biology and psychology. ‘I came here because it felt different – a better learning environment.’

Studio student George Howarth collected a great round of GCSE results, including an A/7 in his favourite subject, art. ‘I’m staying at the Studio to study graphics and fine art,’ he says. ‘I want to be a graphics artist when I leave here…’

We’ve had another year of excellent A level results at the Studio – our first under our new principal, Jill Davies.

Our average grade in vocational is a D (distinction) and arts and graphics results have been amazing. As a result of the strength of our results, we’re now running an Extended Diploma in games, VFX and animation.

As ever, our Studio students are going to a wide variety of exciting destinations. Degree apprenticeships have proved popular amongst our students this year, giving them the opportunity to work with a global business and earn while they learn.

Tyler Rotherham has spent the summer working at Sony, and following his (starred distinction) D*D*D*D, he will head to Abertay this autumn to study games production.

Sami Richards gained an A in computing alongside (starred distinction)  D*D* in scripting and programming; Ollie Bielby Smith secured an A* in graphics plus a starred distinction (D*D*) in digital publishing, and will now head to the University of Leeds. Both he and Alex Sinir have been at the Studio for the last four years, taking their GCSEs and A levels here. Alex gained a DD (distinction) in enterprise, alongside an A in his graphics A level, and an A in his EPQ (extended project qualification).